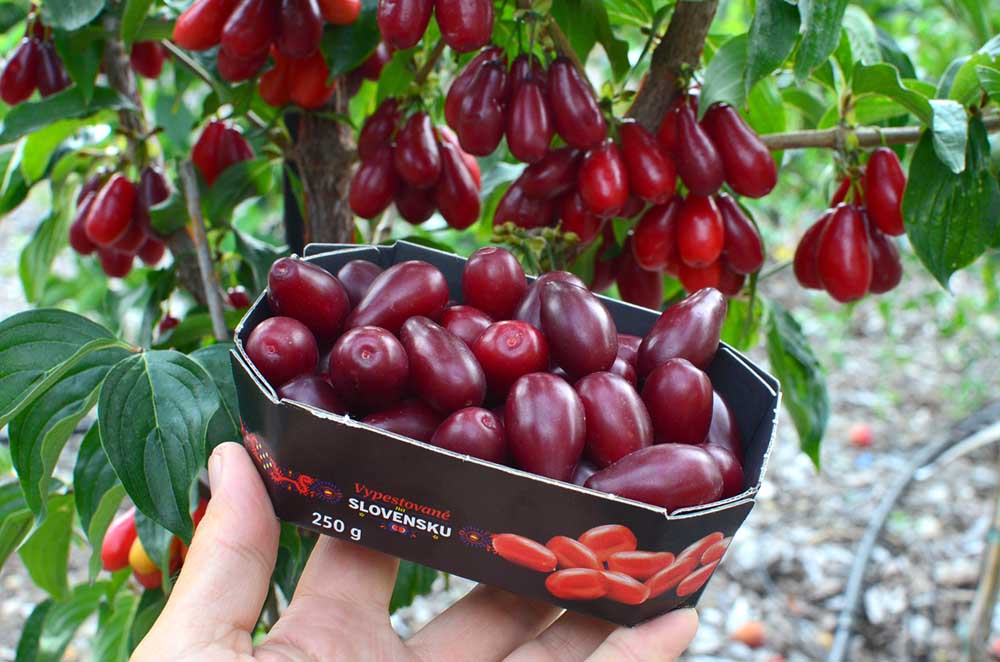 Cornelian cherry is a medicinal plant from Cornaceae family which contains flavonoid compositions and is high antioxidants along with anti-inflammatory compounds. The study showed that consumption of Cornelian cherry might be helpful in hypercholesterolemic patients that might be due to anti-oxidative and anti-inflammatory activities of the plants. In a meanwhile atherosclerosis, which is the end of gradual deposition of lipids in the lower part of blood vessel endothelium, is the leading cause of mortality and morbidity in humans. Powder of Cornelian cherry in combination with lovastatin (statin drug used for lowering cholesterol) significantly reduced fibrinogen levels in comparison with high cholesterol group (hypercholesterolemia). Additionally its powder could decrease the fibrinogen level more than lovastatin. The results showed that consumption of Cornelian cherry might be useful in atherosclerotic patients due to its reducing effects on fibrinogen. The horticultural products play a vital role in the keeping of health and in disease prevention, such as cardiovascular disease, inflammation, cancer and ageing-related disorders. Many books have reported antioxidant effects of ANTs, such as vasoprotective, anti-inflammatory, anticarcinogenic, antiobesity, and antidiabetic effects. The fermentation and concentration of the fruits of Cornelian cherry is performed for making a very popular local form of raki, which is also considered to have significant therapeutic aspects as an anti-rheumatic when both drunk and applied externally.

Investigation on cell lines and animal models and clinical trials in humans propose that ANTs display antidiabetic properties and may lower blood glucose by improving insulin resistance, protecting β cells, increasing excretion of insulin and decreasing digestion of sugars in the small intestine. The study has shown that Ursolic acid (UA) in the plant exerted an insulin sensitizing effect as an insulin receptor activator in vitro and had effectually lowered the blood glucose level. UA had raised the glycogen level in the liver when compared with the diabetic control group. In conclusion, the studies demonstrate that UA may play a major role in diabetes mellitus by means of lessening hyperglycemia, hyperlipidemia, hepatic glucose production, and the influx of glucose through the polyol pathway. UA may be helpful in preventing diabetic problems by improving the polyol pathway likewise the lipid metabolism and that it can function as a potential modulator of hepatic glucose production, which is partly mediated by up-regulating glucose utilization and glycogen storage and down regulating glyconeogenesis in the liver and kidney. Other data propose that ANTs and UA purified from Cornelian cherry fruits have biological activities which improve certain metabolic parameters related with diets high in saturated fats and obesity.

Cornelian cherry fruits are composed of important amounts of ANTs. It is recognized that ANTs have antioxidant and anti-inflammatory properties. It has been also used for the medical treatment of gastrointestinal disorder and diarrhea. In 1996, one study showed that Cornelian cherry has hepatoprotective activity. Moreover, in 2003, researchers discovered the gastroprotective and hypolipidemic activity of the plant.

Fruits from several Cornus spp. have been used to boost liver and kidney functions. They are also reported to have antihistamine, anti-bacterial, anti-microbial, anti-allergic, and anti-malarial activities. An important study has shown the immunoregulatory effects of Cornelian cherry. The anti-inflammatory effect of this plant is well-known all over the world. Cornelian cherry fruits have been also used for the treatment of gastrointestinal disorders and diarrhea. Cornelian cherry fruit may be considered as a significant nutritional supplement. Calcium (Ca), Potassium (K), sodium (Na), zinc (Zn), iron (Fe), manganese (Mn), and copper (Cu) were present in Cornelian cherry juice. Cornelian cherry juice contained high levels of calcium, reaching 10-fold higher (323 mg/L) levels than other juices (14-77 mg/L). These date show that Cornelian cherry juices are rich in various essential elements and might be considered as an imperative dietary mineral supplementation for individuals deficient in nutritional factors.

Ursolic acid (UA) significantly lowered the plasma total cholesterol, free fatty acid, and triglyceride concentrations, whereas it regularized hepatic triglyceride concentration. One study in 2001 showed the anticancer functions of Cornelian cherry. In the leaves if the plant, ellagic and gallic acid were found to be the main Compounds, which exhibit anticancer activity. Additionally, the antioxidant characteristic is also a common feature for polyphenols providing for cell protection by free radical scavenging. Radio recovery potentials of Cornus mas and Cornus monogyna were observed, seen as a reduced incidence of radiation-induced micronuclei, reduced levels of lipid peroxidation products, and two-fold enhanced apoptosis. Both extracts decelerated down cell proliferation progressively, enabling more time for repair. The Cornelian cherry are also among the main constituents of numerous antidiabetic herbal preparations in Asian countries.