MIKROMAX - water soluble mixture of micronutrients in chelated form
9.60€
out of stock 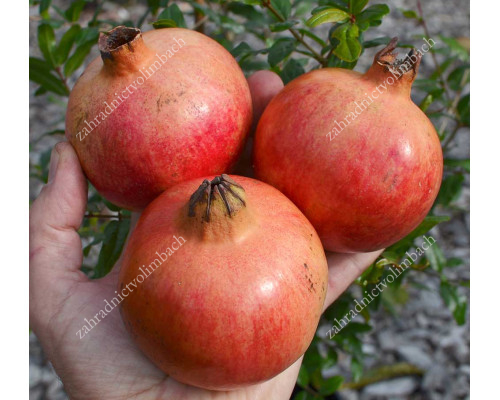 The variety is known for its exceptional sweetness, soft edible seeds and external colour which ranges from cream to deep pink. The most commonly grown variety in Spain. It comes from Elche (Alicante).

Vigour: strong, forms a naturally branched, deciduous shrub that can live to old age, even several centuries. Can be grown in a large pot as a container plant throughout its life.
Blossom: self-fertile, pollinator is not necessary for producing a crop. However will produce a heavy crop if planted in close proximity to a pollination partner which can be another variety of pomegranate. Flowers small, simple, bright orange in June, July, then more randomly in August and early September.
Fruit: large, 300 - 480 g, cream/deep-pink, sweet edible seeds
Harvest season: the fruits ripen gradually from late September to October
Frost resistance: to -14°C, as the plants gets older becomes more frost tolerant
Disease resistance: pomegranate shrubs are one of the easier fruits to work with since they are not usually affected by pests or diseases. Suitable for organic or no-spray culture.

Pomegranates are not grafted onto any rootstock, so in areas where it gets cold enough to freeze, the tops of the plants may die back, they still come back and produce the same fruit.